Mia Winchell is a middle schooler with a secret: for her, everything has a color as well as a shape or a sound. Until third grade Mia thought everyone saw things that way, but when she tried to explain it in math class everyone laughed at her and her teacher thought she was lying. Since then, she’s kept her secret to herself. But one day in the grocery store Mia meets a little boy who also sees colors for words. Their meeting emboldens Mia to confess her secret to her parents. The confession isn’t easy, and it takes them some time to understand.

It’s been a tough year for Mia. Her grandfather’s death had her whole family, and especially Mia, mourning. Now she has to deal with reinterpreting who she is as someone with a condition named synesthesia. Will she be able to mesh who she once was with who she is now?

I listened to A Mango-Shaped Space as an audio book expertly read by Danielle Ferland. Though I was enjoying the story and fascinated by the details of synesthesia, a condition artists like Van Gogh and Rachmaninoff also had, I must admit that I considered not finishing the book at a point about halfway through. The synesthesia had been explained, and the plot was spiraling toward both inevitable bad decisions of adolescence and difficult facts of life. Though I took a break from the story, I couldn’t resist finishing it, and I’m glad I did. Not all of the terrible things I was anticipating came to pass, and the story wraps up in a place of warmth and love that left me feeling buoyed rather than sad.

This book has so many points that readers can connect to. It’s rich in details of neuroscience, personal relationships between classmates and family members, death and grieving. This would make a great addition to a classroom or school library.

I listened to A Mango-Shaped Space as an audio book from my local library. 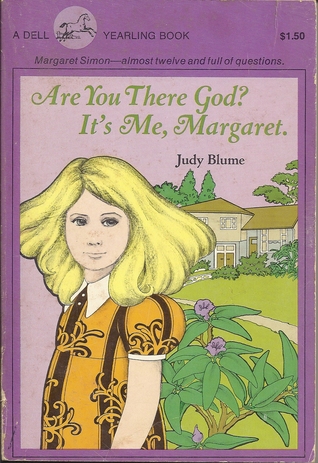 At my elementary school, you had to get permission from your parents to check Are You There God? It’s Me Margaret out of the library. The permission books were kept in the librarian’s back room. My parents would have been fine with signing, but the mechanics of the whole thing were kind of a big deal, so I never got it from the library. In social circles it wasn’t considered an embarrassing book to carry around, not like Forever, so I ordered it from the book order, and loved it. I passed it on to my daughter when she was the right age for it. The book introduces things like puberty, faith, and growing older in a way that allows kids to consider the ideas and information privately. It allows readers to ruminate without making themselves vulnerable to others’ opinions.