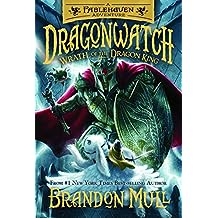 Seth is frozen–rendered completely immobile by the fear of the dragon before him. Even his knowledge that this dragon is a friend cannot outweigh the fear that paralyses him. Seth and his sister Kendra may be co-caretakers at Wyrmroost, but only Kendra is immune to dragon fear, and Seth is only protected when he holds her hand. There are a few logistical problems with that, plus it’s embarrassing!

Now Celebrant, the Dragon King, has invited Seth and Kendra to a feast and it’s an invitation they can’t refuse. But Kendra’s immunity to dragon fear once helped her get the better of Celebrant, and that made him her enemy. Will the dragons honor their rules of hospitality at the feast or will Seth and Kendra be risking their lives just to attend?

I came to this preview of the second book of the Dragonwatch series without having read the first book nor any other than the first book in the Fablehaven series. Nevertheless, the world-building in Wrath of the Dragon King is strong, so although there were many characters to be introduced to in a short time, I felt as if I understood the world itself and the challenges the main characters faced right away.

This story will be loved by readers who love magical creatures, lore, and of course, mythical battles. There is magic here, but much of the interest in the tale seems to focus on strategy, cleverness, ancient rules, and societies. Seth and Kendra have a real challenge in front of them. I can’t wait to find out how it ends!

I received a preview of Wrath of the Dragon King from the publisher in exchange for an honest review.

The corn maze at Ramridge Ranch is the talk of the sixth grade. It’s a community tradition to visit the ranch in fall. In fact, folks come from miles around to enjoy some fall fun. But this year there are rumors that children are going missing in the maze—and it’s all the rage for the older kids to boast of having visited. But James isn’t allowed. His parents are adamant that he remain at home and stay safe.

Ignoring his parents, James sneaks off to navigate the maze alone, thinking he’ll only be gone a few hours and they won’t be any the wiser. It doesn’t take long before James realizes he might just have made a terrible mistake.

This creepy novella is the perfect read before Halloween! Karuna Savoie has placed interesting characters into a familiar setting readers can see and smell and even feel. In addition, the plot of this story is no ordinary creepy thriller.  James’ decision will take readers on a thrill ride as they navigate the twists and turns of events at Ramridge Ranch.

Karuna Savoie is an amazingly talented young writer. Fortunately for readers everywhere, she’s got a brain full of story ideas to share with the world. I can’t wait to read the next installment in the Lore of Ramridge series.

Full disclosure: Karuna is a client of my editorial business, so I have had a hand in polishing this book. I don’t write reviews for all of my clients, but Karuna’s amazing imagination and writing skills make The Lore of Ramridge the great read that it is, so I felt I could give an honest review. Keep your eyes on her. She’s a writer who’s going places.

I really wanted to like this book. I love food and history, and I always have. I know this book would have just jumped into my hands from the bookstore shelf when I was a kid. I read merrily along at first, albeit briefly shaking my head at why the publisher would think a ten question multiple choice quiz was needed or desirable on every fifth spread. But soon I began to be slowed by the content itself.

The recipes are made with real, not processed, ingredients (beyond the occasional can of beans) and look to support both healthy eating and good cooking techniques, so I was eager to try some. Unfortunately, in the first recipe I decided to try “Barley Bread” I struck out on finding the barley flour required (and if Whole Foods doesn’t have it, I don’t know where to look except online). On the other hand, had I been a kid, I might have chosen one of the other recipes like hummus which have ingredients more likely to be found at a supermarket or at least at Whole Foods. So the recipes aren’t a deal breaker.

The format is one National Geographic Kids publications are known for: bright colorful pictures, enticing subtitles, and “chunked” text so kids can read a little or a lot. These pages are appealing to kids at a range of reading levels. The problem is that sometimes the pictures chosen don’t reflect the content. For example, in the medieval times chapter there’s a recipe for pork meatballs cooked in almond milk and served on a trencher. The recipe is for meatballs and the trencher is made from a baguette, but the picture above the recipe clearly shows a meatball sub. Nothing in the recipe makes red sauce with green herbs artfully sprinkled on top. This may seem like a niggling complaint, and yet, pictures pack a huge informational punch, especially with kids, and this picture makes it look as if people in medieval times ate tomato sauce–when tomatoes had not yet arrived in Europe at this time. That’s very misleading.

There were a number of problems I found with the text itself as well. I found the text to be culturally loaded more than once. The game played with pig knuckles was called a “primitive” form of jacks–I’m not sure why that label was used–the game is pretty much the same whether you use a ball and machine-made jacks or pig knuckles. In addition, sometimes the text seemed simply to be written too quickly without editing or reflection as is the case in this sentence:  “Wild animals ran freely through city streets, so sometimes it was hard to get to the market because a cow was in the way!” I’m pretty sure there weren’t wild cows in medieval Europe.

But I read on, hoping I would be won over. I gave up on the book entirely when I reached the chapter on Mongols and the Silk Road. In Menus of the Rich and Famished, it speaks of a traditional dish for the wealthy in the 1400s made by filling a goat’s stomach with hot rocks vegetables, water, and potatoes–there’s a lovely photo of a potato and a cabbage above the section. Sorry folks, no potatoes in Mongolia in the 15th century, they’re still in South America. I can’t imagine where the author got this information or why it made through to publication.

I’m so sorry I can’t recommend this book to kids and families. Food and history are fun subjects, and together with good recipes they’re really fabulous. But only if you can trust them to be correct.

I received this book from the publisher in exchange for an honest review.