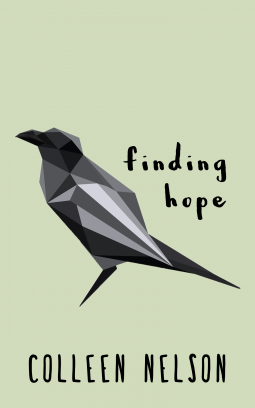 Colleen Nelson’s Finding Hope is a book about addiction, abuse, family, despair, and hope. It’s a dark and real story that follows two siblings: Hope and Eric who live in a tiny town in Canada. They’re both stuck, he because of his addiction and his reputation as an addict and she because of her small-town role as an addict’s sister. When Hope receives the opportunity to attend an exclusive boarding school in the city, she takes it so that she can focus on her future, but the future and family ties are never that simple.

This is a dark story, but it felt raw and real. Hope and Eric seemed very realistic in their struggles, he with drug addiction and she with adolescence and family loyalty. I was drawn in by the story though I was continually cringing at the choices they made.

I don’t often choose to read a dark and realistic story (Paranormal or mystery stories don’t pack the same emotional punch for me.), but the appealing characters, their realistic struggles, and the hope they did, in fact, find at the end made this a satisfying read.

I received an advance reader copy of Finding Hope courtesy of NetGalley and Dundurn Publishers in exchange for an honest review.