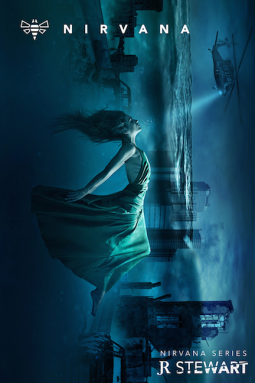 It feels like a long time since she was a rock star in a college girl band. When the world changed Kenders had to choose. She could stay on her own in a world that was rapidly falling apart or marry Andrew and go with him to the Barracks, to relative safety and the continuation of Andrew’s scientific work. But nothing is simple in the Barracks. To stay, Kenders has had to sign on to a security job under the Corporal, and six months ago he gave her the word that Andrew was dead.

Kenders won’t believe it, she can’t, especially since she keeps encountering Andrew during her visits to Nirvana, the virtual reality world that everyone in the Barracks is allowed to access. Now the executives who run the Barracks are pressuring Kenders to sign and acknowledgement of Andrew’s death, and Kenders is in a secret race to find out if he’s alive or if the Andrew who visits her in Nirvana is as virtual as the environment around her.

This is the first book in a dystopian trilogy.

I read Nirvana as an electronic Advance Reader Copy courtesy of Blue Moon Publishers and NetGalley in exchange for an honest review.