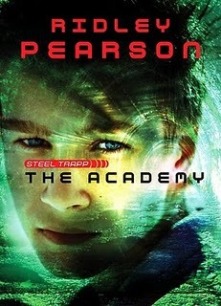 Steven “Steel” Trapp has it — a mind like a steel trap, that is. His mind has gotten him into a fancy private boarding school, but it’s also getting him into trouble. On move-in day at school his prodigious memory is helping him navigate the campus when Steel happens onto a shady lesson. Steel just thinks it’s cool — a school where you get taught to use blow guns? Bring it on! But he finds out pretty quickly that this was a secret lesson when the students and instructor attempt to chase him down. When Steel discovers that his good friend Kaileigh is also a new student, they set out to solve the mystery of the school that isn’t what it seems. Before they know it they’re embroiled in international espionage.

I went looking for a kid spy novel at the library and I found it in Steel Trapp: The Academy! It’s actually the second book in a two book series, but unlike some series I’ve started in the middle, I had no difficulty catching up with the story. This story has enough suspense going to keep even reluctant readers reading and enough twists and turns to keep readers guessing. It’s a very fun read and exactly what I was looking for. This book would be a great addition to classroom and school library shelves.

I’m a Boston native and found that the author changed the geography of the city in a few significant ways. That was puzzling as I tried to link my own knowledge with the story and some things were just physically impossible. Also, the author had the kids pull the cord to signal a stop request on the bus. I had to chuckle. I loved the detail, but it’s been at least 15 years since I’ve ridden on a bus here that had pull cords for stop requests. Despite these curious changes, it was fun to read a book that featured Boston. I’ll be looking for Steel Trapp: The Challenge so that I can read about Steel and Kaileigh’s first adventure.