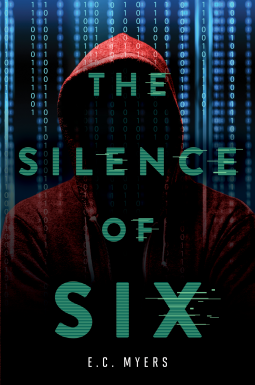 Max used to be a hacker. He and his best friend Evan spent a lot of time that way. But then Max got pretty busy with his life and his new girlfriend and kind of lost track of Evan, until the night that Evan hacked into the live presidential debate and killed himself on camera. That got everyone’s attention, and, unfortunately, the Feds think Max is involved in a plot he knows nothing whatsoever about.

This is a classic thriller. It picked me up at the beginning and sent me along on Max’s ride. It was fast paced with just the right amount of intrigue and romance to keep me interested. The ending felt a bit rushed. I would have loved a bit more detail there, but there was enough that I was satisfied with the ending. I was pleased with the hints that this was the first book in a series.

Kids and adults who like fast-paced thrillers will enjoy reading The Silence of Six. It is likely to draw in reluctant readers with an interest in computers, thrilling chase scenes, and kids who survive against the odds. It’s also a fun read for mystery readers like me who want to tease out the clues of the story before the main character gets there.

I read this book courtesy of Adaptive Studios and Net Galley.